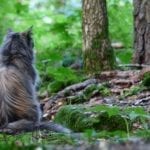 Lost cats that are not found by their families are a major contributing factor to worldwide feral, shelter, and homeless cat populations. In 2011 a preliminary, non-scientific study by Missing Pet Partnership determined that the majority (93%) of escaped indoor-only cats were found within a 3-house radius of their escape point, hiding in fear. A scientific study is needed to verify these preliminary findings and to help educate animal welfare, veterinarian, and animal shelter staff how to properly advise cat owners where and how to search for a missing cat. Missing Pet Partnership is excited to announce that we’ve partnered with the University of Queensland (Australia) to conduct the first-ever Missing Cat Study. Through an on-line survey, this study will interview cat owner/guardians who’ve lost a cat and identify the typical distances that lost cats travel, how they behave when lost, and the most effective recovery methods.  If you’ve ever lost a cat, please help us by participating in the below survey.  Thank you for helping MPP to help save the lives of cats!  The survey should only take 8 minutes to complete.  To take the survey, click here (the survey is closed).

The Missing Cat Study Has Been Published!

Abstract:  Missing pet cats are often not found by their owners, with many being euthanized at shelters. This study aimed to describe times that lost cats were missing for, search methods associated with their recovery, locations where found and distances travelled. A retrospective case series was conducted where self-selected participants whose cat had gone missing provided data in an online questionnaire. Of the 1210 study cats, only 61% were found within one year, with 34% recovered alive by the owner within 7 days. Few cats were found alive after 90 days. There was evidence that physical searching increased the chance of finding the cat alive (p= 0.073), and 75% of cats were found within 500 m of the point of escape. Up to 75% of cats with outdoor access traveled 1609 m, further than the distance traveled by indoor-only cats (137 m; p ? 0.001). Cats considered to be highly curious were more likely to be found inside someone else’s house compared to other personality types. These findings suggest that thorough physical searching is a useful strategy, and should be conducted within the first week after cats go missing. They also support further investigation into whether shelter, neuter and return programs improve the chance of owners recovering missing cats and decrease numbers of cats euthanized in shelters