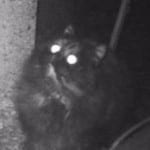 Many lost cats will react in fear when they are approached by any person including their owner.  This well documented behavior is frequently confusing and even heart-breaking to the lost cat’s owner who cannot understand why their cat would act this way.  I think that former pet detective Donna Holsten described this phenomenon best when she said that “cats are very contextual.”  In his home environment, the cat may be very affectionate and even outgoing, but when displaced from this familiar environment, he quickly becomes instinctual and will frequently react in fear towards all people.

I recently found an interesting research study from Poland that documented responses of cats to people in relation to their distance from human settlements.  Goszczynski et al. (2009) found that the cat’s reaction to human presence (including its owner) may be dependent on the distance from the cat’s home.  At distances of less than 199 m (<650 feet) from buildings, 61% of cats attempted to run or hide when they saw a human observer.  This increased to 94% fear reactions at distances of 200-499 m (650 ft – 1,600 ft), and all cats reacted fearfully at distances over 500 m (0.3 miles).  What is particularly interesting about these results is that the cats in the study were not lost (presumably they were resident cats exploring within the limits of their home ranges), yet they still reacted in fear towards people when the people where encountered outside of their normal context (i.e. cats expect to encounter people near human settlements and not while they are hunting in the woods).  This suggests that a cat does not have to be lost and panicked (or in “survival mode” as it is frequently called) in order for the cat to react instinctively to perceived threats.  Rather this fear response to anything out of the ordinary is a natural continuation of their normal behavior.  I suppose another way to look at it is that cats are always in “survival mode” and it only takes a small change in their normal environment to elicit this fearful behavior.

1 thought on “Fear Reactions of Cats to People”