Road traffic accidents (RTAs) are a common cause of injury and death for outdoor-access cats.  Olsen and Allen (2001) found that 51% of outdoor-access cats that suddenly and unexpectedly died were the result of RTAs, and Rochlitz et al. (2001) found that RTAs were the forth most common cause of death for cats after old age, cancer, and renal failure.  Based on the results of this study, Rochlitz (2003) conducted a more in-depth study to determine which factors may predispose cats to being involved in a RTA.  This study is particularly interesting because the results can be used to improve behavioral profiling of lost outdoor-access cats. 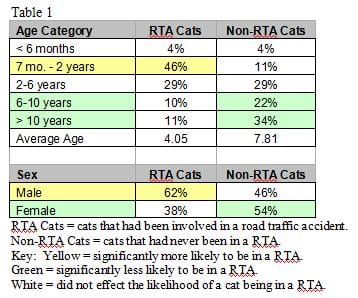 The cat’s age and sex were the two most important factors in determining whether s/he would be involved in a RTA.  Cats between the ages of 7 months to 2 years were most likely to be in a RTA and cats 6 years or older were less likely.  Overall, the likelihood of being in a RTA decreased by 16% for every year increase in the cat’s age.  Rochlitz (2003) suggests that this may be due to changes in the behavior of cats as they get older such as spending more time indoors, staying closer to home, and being more cautious.  Male cats were more than twice as likely to be involved in a RTA as female cats.  Due to small sample size, Rochlitz (2003) was unable to determine whether being spayed or neutered was a significant factor.  However, other studies have found that un-neutered male cats have much larger home ranges than neutered males or spayed or un-spayed females, which suggests they might be more likely to be in a RTA.  Rochlitz (2003) was unable to determine why males in general were more likely to be in a RTA than females, but males were found to spend more time outdoors than female cats.

The cat’s pedigree also effected whether s/he might be involved in a RTA.  Pedigree cats, mostly Siamese, Persian and Burmese in this study, were less than a third as likely to be hit by a car as domestic short-hair/long-hair cats or mixed breed cats.  The difference in risk for pedigree cats may be partly due to differences in the owner’s behavior and the cat’s behavior such as owners interacting with their cats more and cats spending more time indoors. 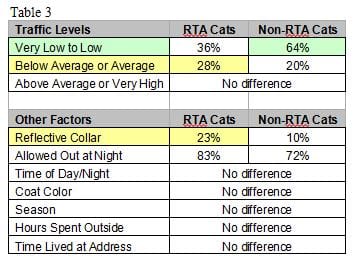 Almost equally important as the significant factors, Rochlitz (2003) also found that some factors did not influence whether a cat would in a RTA.  These factors included: coat color, whether the cat was allowed outside at night, season, the amount of time spent outside, and the time lived at an address.  Contrary to what was expected, dark colored cats and cats that were let outside at night, were not more likely to be hit by a car.  This particular study was conducted in Cambridge, UK, and surrounding towns, so the lack of seasonal differences may not be generalized to other areas of the world with different climates.  While amount of time spent outside was not independently linked to an increased risk of a RTA, cats in the high risk categories (i.e. young cats, male cats, and mixed-breed cats) all spent more time outside.  Time lived at an address was also strongly linked to the age of the cat and how much time s/he spent outdoors.  The sample of older cats that had moved (3) was really too small to determine if this was an influencing factor.

Rochlitz (2003) also attempted to measure some of the characteristics of RTAs.  Most RTAs (69%-80%) occurred just outside or very near the cat’s home.  However, this data may be biased because cats that were involved in RTAs farther from home may be less likely to be found by their owners’ and brought to a vet.  Rochlitz (2003) also attempted to determine what time of day/night most RTAs took place, but this analysis was inconclusive due to the large number of unknowns (47% of accidents).

Road traffic accidents are frequently a concern when an outdoor-access cat goes missing.  The results of this study help identify young (7 month – 2 years), male, mixed-breed cats as the highest risk group for RTAs.  Missing cats that fall into these categories should prompt a thorough search of the area around the home and immediate neighbor’s homes in case the missing cat has been involved in a RTA.  The results of this study also show that only 25% of cats involved in a RTA ended up dying.  These results may be somewhat biased since owners are probably less likely to bring a dead cat to the veterinarian, but they still show that many cats do survive being hit by a car.  This highlights the importance of thoroughly searching for the missing cat in case it is injured and hiding in silence.  More research needs to be conducted on the behavior of cats immediately after they have been in a RTA in order to improve our ability to find them.

To view a more detailed summary of Rochlitz’s (2003) two studies, follow this link to A Summary of a Study of Factors that may Predispose Domestic Cats to Road Traffic Accidents.

Rochlitz, I., T. De Wit, and D.M. Broom.  2001.  A pilot study on the longevity and causes of death of cats in Britain.  Cheltenham, BSAVA Congress Clinical Research Abstracts. p.528.