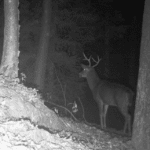 Most people are probably not even aware that there are such a thing as deer traps, but wildlife biologists use a variety of traps to capture deer including box traps, Clover traps (a netted-box trap), drop nets, and drive nets..  Deer, like many trap-shy dogs, are generally not comfortable entering enclosed spaces, so the design of some of these traps might be useful for capturing shy dogs as well.  These are mostly just ideas at this point since I don’t yet have experience using these traps and some may not prove to be practical.  However, I wanted to share the variety of trap designs available in scientific research journals.  In this article, I’m going to focus on Clover traps and box traps, and next I’ll look at designs for net traps.

The Clover trap is what first caught my attention when I was trying to think of a way to improve dog enclosure traps.  The Clover trap, which is named after its designer, is a netted-box trap.  Here is a demo video of a Clover trap.  You really only need to watch the first 2 minutes of the video, and I would not suggest wrestling any trapped dogs to subdue them.

I do think this trap would require some modifications to securely trap a dog, but it does offer some interesting possibilities.  The netting makes the trap appear much more open than the traditional wire cage trap.  On the downside you probably would need to supervise the trap closely because a dog could likely chew through the netting.  The trip-wire mechanism might also need to be modified.  However, a very useful feature of this trap is that it doesn’t require the dog to duck under the door to enter the trap.  Many dogs (even non-trap-shy dogs) are somewhat leery of the overhanging door on many cage traps.  The Clover trap has a netted guillotine door that rolls up at the top of the trap.

This type of netted-guillotine door might also be modified to attach to a larger dog enclosure trap like this one.  This enclosure trap is meant to be monitored and manually triggered when the dog enters, so chewing through the netting wouldn’t be a concern.  This particular trap uses a large wire-fence door, which makes the trap very comfortable to enter, but the door takes up more space within the trap and is slower to close than a guillotine door.  Here’s a video of my dog being caught in the trap.  Other enclosure traps often use a solid guillotine door, which can be intimidating for the dog to walk under.

For design instructions for the Clover Trap see VerCauteren’s (1999) research paper.  Clover traps can also be bought from online suppliers such as Wildlife Capture.com (sold as parts or as complete traps).

The original deer box trap is the Stephenson box trap, which is basically a large wooden box with two guillotine type doors so it looks like a tunnel.  While it is an enclosed space, the sheer size of the trap (approximately 10 ft L x 4 ft W x 9 ft H) might make them comfortable for many dogs to enter.  These traps would be useful in a location where constant monitoring is not possible since they are very secure and offer some protection from adverse weather.  Anderson and Nielsen (2002) provide an updated design and instructions for anyone who might be interested in exploring this option further.