It’s that time of year again, and the coyote mating meme is making the rounds on Facebook.  But ARE coyote attacks on pets really more common during mating season?  In case you are not familiar, the coyote mating meme states: “WARNING!  The next 4-6 weeks is mating season for coyotes. Please do NOT let your dogs, or cats out alone.  The outcome can be tragic as they can and will attack your pets. (Coyote breeding typically peaks in late February, and early March.)  Male coyotes can become more aggressive during this time of year.”  In this article, I’m going to review the existing scientific research and determine if it supports that coyotes are more dangerous during the mating season. 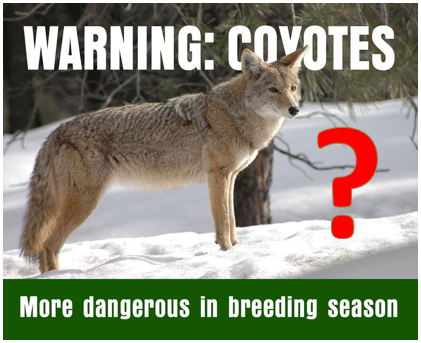 If you don't have time to read the full article, check out the infographic.  Feel free to download and share to help spread the word.

When is Coyote Mating Season?

The coyote mating meme generally states that coyote mating or breeding season lasts 4-6 weeks and peeks in late February to early March.  Coyote researchers generally classify January through April as the mating season, May through August as pup rearing and September through December as dispersal.  (Dispersal is when young coyotes leave the pack to find their own territory.)  Coyote breeding season may vary by a month or so depending on the geographic location of the coyotes.  For example in Massachusetts, mating season is late December to March.  Researchers don't mention a "peak" to the breeding season.  Most likely it varies each year depending on weather, prey abundance and other factors.

Coyote attacks on pets might increase during the mating season when coyotes are more territorial.  However, male coyotes in particular are not more aggressive.  All coyotes in a pack may defend their territory.  Territorial attacks would hypothetically be more likely on medium to large dogs that coyotes saw as more of a threat.

Food can be harder to find during the winter.  Coyote attacks might also increase if coyotes are traveling into urban/suburban areas looking for easier to obtain food.  In this case, we could expect predatory attacks on small dogs and cats.

What Does the Research Show?

Overall, researchers found that seasonality was not a good predictor of coyote attacks.  More studies found that coyote attacks increased during the pup rearing season rather than the breeding season. However, no reported results were statistically significant. 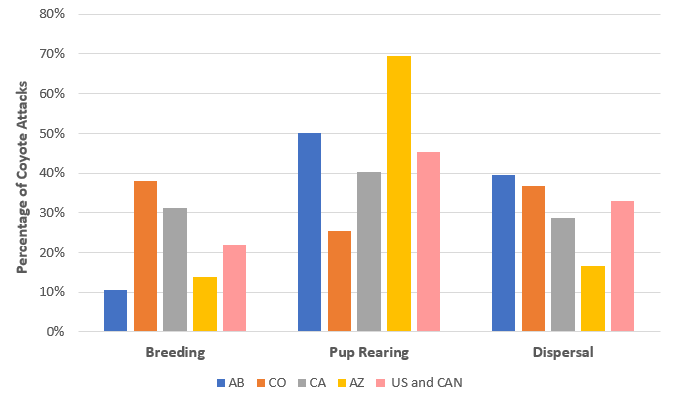 In Chicago, IL, most attacks on dogs took place in December through February (mating season) with another peak in April (when pups were born).  Attacks on larger dogs usually involved two or more coyotes and mostly occurred during mating season.  (Gehrt and Riley 2010).

In southern CA, there were nearly twice as many attacks on dogs during July.  Most dogs in this study (81%) were less than 22 lbs. (Frauenthal et al. 2017)

In Tucson, AZ, most attacks on cats were during the pup rearing season.  (Grubbs and Krausman 2009)

In the US and Canada, most attacks on humans were during the pup rearing season. (White and Gehrt 2009)

However, no reported results were statistically significant.

The existing research does not support the coyote mating meme.  Overall, seasonality was not a good predictor of coyote attacks.  More research studies found that coyote attacks on pets increased during  the pup rearing season (May-Aug) rather than the mating season (Jan-April). 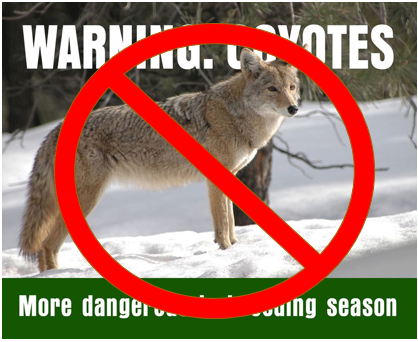 Why Coyote Attacks Might Increase During Pup Rearing Season

More research studies found that coyote attacks on pets increased during the pup rearing season rather than the breeding season.  Attacks on pets might increase during pup rearing due to the need for more food for the pups and coyotes protecting dens and/or pups.  In this case, we would expect to see more predatory attacks on small dogs and cats.  Attacks on medium to large dogs would be more likely were the dog approached a coyote den.

Why the Coyote Mating Meme May Have Been Created

Just seeing coyotes may increase the perception that there is increased danger.  Several studies reported that sightings of coyotes were highest during mating season.  In the winter, coyotes are often more visible, especially in areas with snow.  Coyotes also tend to travel more extensively in winter. These increased sightings (and not increased attacks) may be the reason why the mating meme was created.

It is important to understand that coyote attacks or aggressive behavior are not common in most areas of the US or Canada.   In Denver, only 12.7% of reports were described as conflicts, and in Calgary (Alberta), only 5% of reports involved aggression or attacks.  In both studies, the vast majority of reported "incidents" were just sightings: 89% in Calgary, Alberta and 75% in Denver, Colorado. 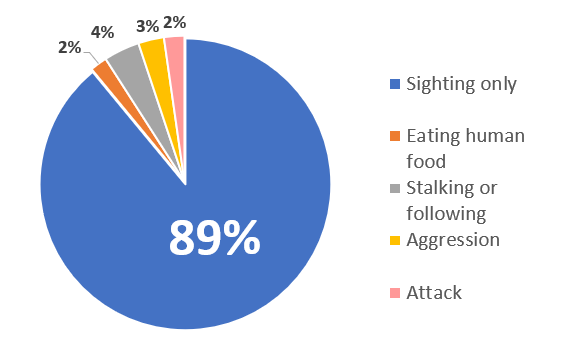 Attacks on people or pets in Calgary, Alberta (Lukasik and Alexander 2011) 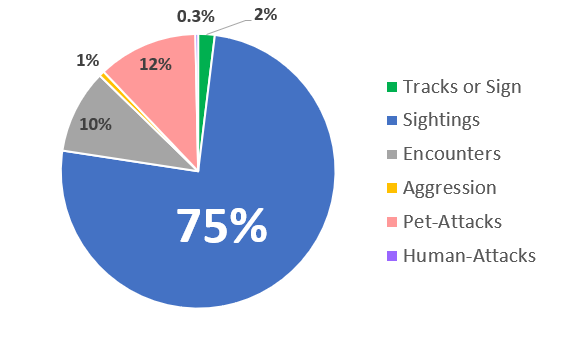 As a species, coyotes pose a relatively low threat to human and pet safety, and conflict is likely limited to specific individuals in the population.  Seasonality is less important than other factors (Lukasik and Alexander 2011).  Coyotes that are more likely to pose a threat are sick or injured coyotes or those habituated to eating human food (e.g. garbage or pet food).

The results of these research studies provide some good tips for keeping pets safe from coyote attacks.

Where to learn more about coyote behavior

Keep in mind that in many areas, coyote attacks on pets are not nearly as common as people tend to assume.  In particular, many cases of missing (and never found) cats are blamed on coyotes without any evidence.  However, in some areas of North America, coyote attacks are more common.  To learn more, check out these articles:

Some coyote behaviors are often misinterpreted as dangerous.  Coyotes may stare at or follow people or pets, and this is not necessarily aggressive behavior.  Another version of the coyote mating meme states that coyotes will lure dogs back to the pack to kill them.  This is another myth.  Check out this article to learn more.