Posters are one of the most successful methods for finding lost cats and dogs, but they need to be designed correctly to be effective.  An effective lost pet poster is both eye-catching and easy to read, especially from a distance. You may think that you already have posters up and that "everyone knows" your pet is missing but this is rarely the case.  When I drive to most lost pet cases, I rarely see any noticeable posters.

The biggest mistake that people make is using their flyers as lost pet posters.

These "posters" are usually 8 1/2 x 11, not noticeable and difficult or even impossible to read from a distance.  Flyers are also important in a lost pet search, but these are meant to be handed to people or posted in locations where people walk. 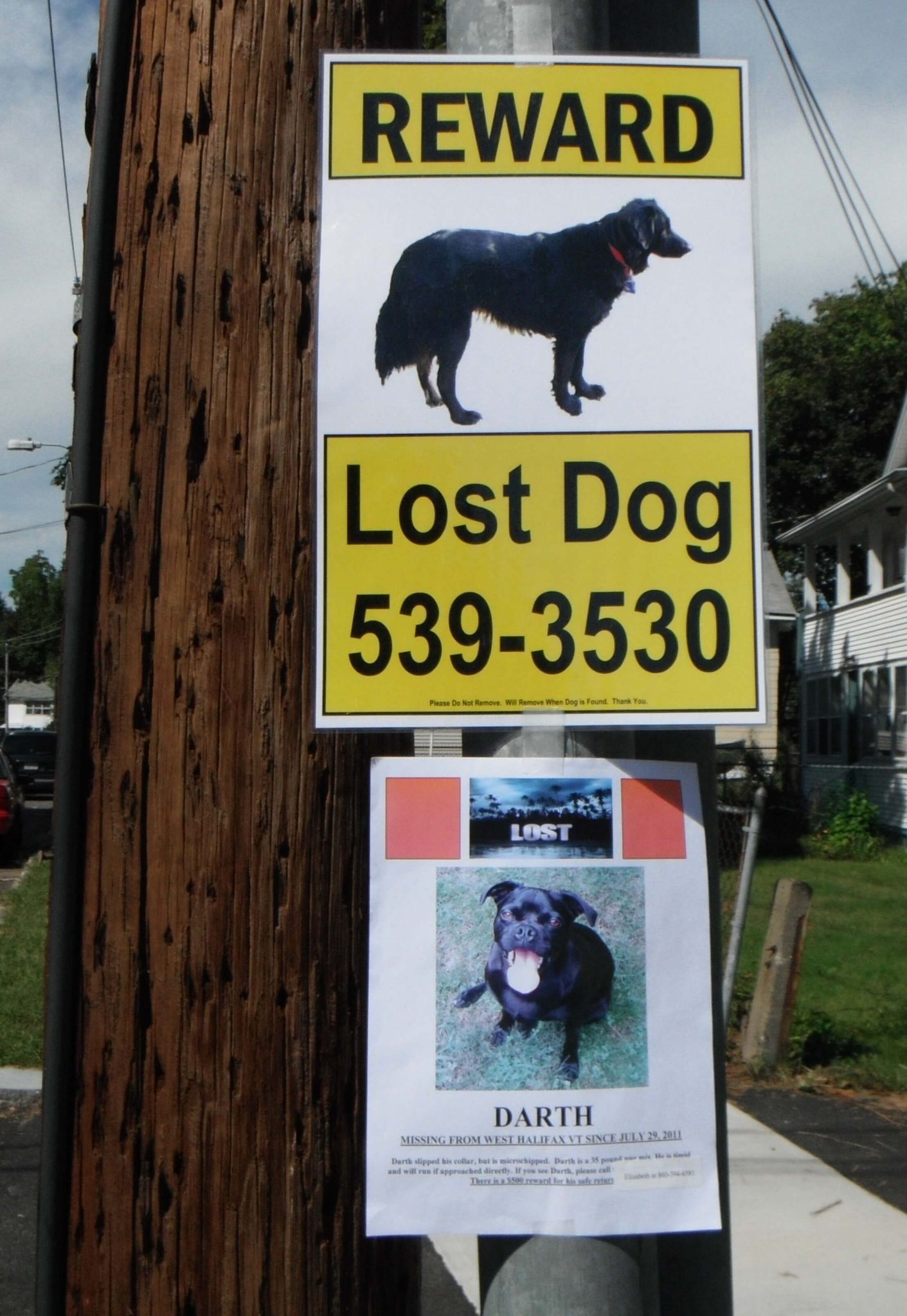 This shows the visibility of an 11x17 poster versus a flyer.

How to Design an Effective Lost Pet Poster 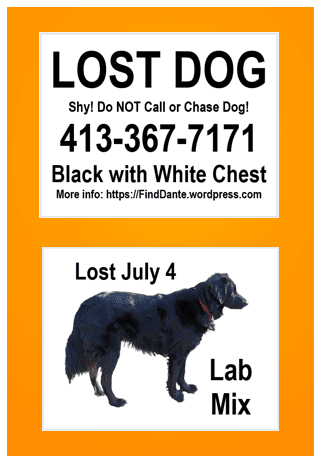 No matter what size poster you make, use as few words as possible and make the text as large as possible.

Text to include on the poster:

Optional text to include (only include these if you are using a large enough poster that you have room):

Selecting a Photo for Your Poster

One of the most important parts of your poster is the photo of your pet.  Like the text on your poster, the photo needs to be easily visible and recognizable from a distance.

Should You Offer a Reward? 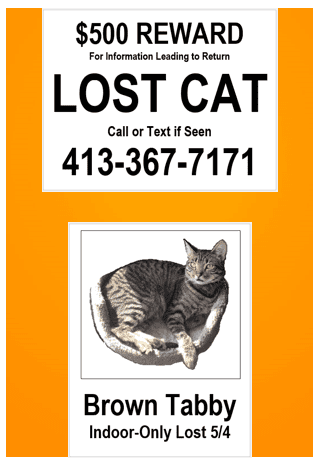 Rewards are most important if your lost cat or dog is very friendly, a puppy or kitten or a recognizable purebred.  In other words, in any case where it is most likely that someone has your pet.

To reduce the chance of people attempting to catch your lost pet themselves, include the following text "Reward for information leading to return" and "Shy - Do Not Chase!"   If your signs without rewards are not generating any sightings after a week or two, then you may want to add a reward at this time.

Amount of the REWARD

Whether or not you include a specific reward amount on the poster is up to you, but if you do not put an amount, people will either call you asking what the reward is or they will probably assume the reward is not very much - unless you put something like "large cash reward".  I generally recommend reward amounts between $100-$500.  Larger rewards can attract the attention of scammers.  However, if you strongly believe that someone has your dog or cat, you might consider offering a very large reward "for their safe return" and "no questions asked."

Larger posters are much more noticeable than small posters.  If cars are going too fast, then drivers will not be able to read the posters.  Make sure to select posters that are large enough that they will be noticed in your area.  If you cannot afford large posters or if these are more likely to be taken down in your area, smaller posters CAN be effective if designed well and placed strategically.  Many people use a combination of large and small posters. 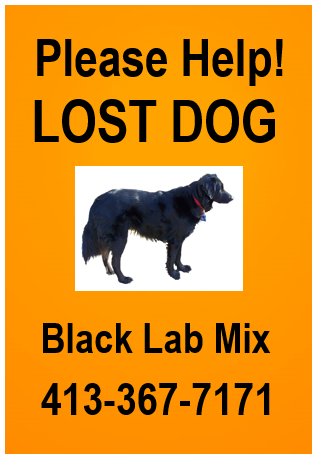 Extra large (22" x 28") florescent poster board posters are the most noticeable.  These are best where cars are driving more than 50 mph or for large multi-lane roads.

Half-size poster board (14" x 22") posters are best where cars are driving less than 50 mph.  Consists of two sheets of paper in page protectors taped to a half-sheet of poster board.  These are one of my favorite size posters.  They cost less to make but take more time to put together.  Typical cost is $1.00 to $2.00 per poster. 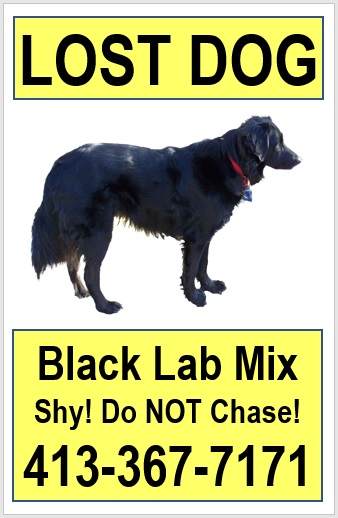 Ledger (11" x 27") posters are best where cars are driving less than 40 mph.  If time rather than money is a concern, these are a good alternative to the 14" x 22" posters.  These can be printed and laminated at an office supply store such as Staples and will last many months in all weather conditions.   You can make them even more noticeable by attaching them to a half-sheet of florescent poster board.  Typical cost is $3.50 to $6.00 per poster. 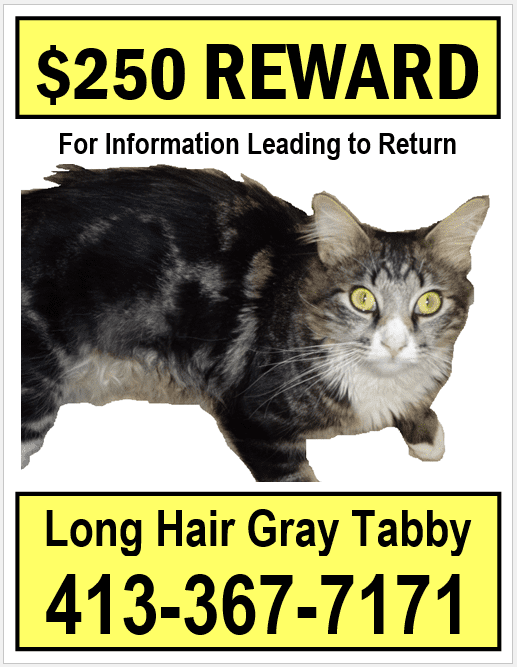 Letter (8.5" x 11") posters are best where cars are driving less than 30 mph or (better yet) stopping.  These posters can either be laminated or placed in page protectors to keep them dry.  To make them more noticeable, use bright colors or attach the poster to a 1/4 piece of florescent poster board.  Typical cost is $0.50 to $2.50 per poster.