While the behavior of lost cats is likely to differ from that of outdoor-access or free-ranging (stray, feral or farm) cats, we can still learn something from studying their normal movement patterns.  In this post, I want to focus on research studies that measured how far cats normally traveled within their home ranges and the maximum distances they traveled from their homes. 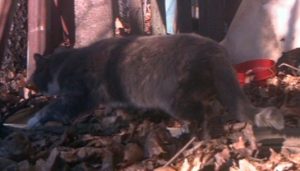 Since outdoor-access cats in suburban areas generally have small home ranges, we can get a better idea of the distances cats are capable of traveling by looking at movements of free-ranging farm cats in rural areas.  Liberg (1980) found that farm cats in Sweden rarely traveled farther than 600 m (0.4 miles) from their home farm.  In comparison, Warner (1985) found that farm cats in Illinois traveled an average maximum distance of 1,697 m (1 mile) from the farm with a range of 956 m (0.6 miles) to 3,013 m (1.9 miles).  Germain (2008) found similar distances for farm cats in France with two cats that traveled 1,500 m (0.9 miles) and 2,500 m (1.6 miles) from the farm in a single outing.

It is important to keep in mind that all of these measurements are the straight-line distance that the cat traveled, and they do not tell us how far the cat actually walked.  In reality, cats may walk considerably farther each day/night than these numbers indicate.  One free-ranging (intact) male cat in rural Spain was continuously tracked for two 12-hour tracking periods (Palomares 1994).   During one 12-hour tracking period, he walked 4,076 m (2.5 miles), but he stayed in the vicinity of one house.  They don’t specify how far from the house he traveled, but 73.9% of his locations (over 5 months) were within 400 m (0.2 miles) of a house.  This is the only published study I could find that calculated actual distance traveled.

In a future post, I intend to look at dispersal distances of free-ranging cats and what dispersal can teach us about lost cat behavior.  Dispersal occurs when a cat leaves its current home range in search of a new home range.

20 thoughts on “How Far Do Cats Travel?”