Note: This article focuses on a few very old research papers on cat homing behavior.  For more recent research, check out my Cat Homing Behavior Survey Results.  This new research includes information on how to determine whether your lost cat is likely to display homing behavior.

One of the most fascinating, but perhaps least understood behaviors of the domestic cat is their ability to find their way home from an unknown location.  This behavior is known as “homing” and is well documented in pigeons and some other animals.  Anecdotally, I have heard numerous stories of homing in lost cats.  However, I was only able to locate two research papers on cat homing ability, and they were both quite old (Herrick 1922 and Precht and Lindenlaub 1954).

Herrick (1922) tested the homing powers of a single cat by transporting her to seven different locations between one and three miles from her home.  He ensured that she was highly motivated to return home because she had a litter of kittens close to weaning age.  At each location, the cat was transported by car in a gunny sack and then placed under a wooden box.  The researchers opened the box remotely and then observed the cat’s behavior until she was out of sight.  Then they waited for her to return home to her kittens.  In a final (8th) trial they took her 16.5 miles away, and she did not return home.

While the ethics of such a study are highly suspect, the results were quite interesting.  In all seven trials, the cat returned home within 4 to 78 hours of being released.  This calculates as an average traveling speed of 0.09 mph to 0.26 mph (0.14-0.42 km/h).  There is a minimum and maximum time because in most cases the researchers only checked for the cat’s return every few hours.  Herrick (1992) assumed that the cat was likely to only travel at night and estimated a traveling speed of 0.11 mph (0.18 km/h).  Prior to the start of this study, Herrick (1992) measured the homing of another cat, which traveled 4.6 miles in 38 hours.  This gives an average traveling speed of 0.12 mph or 0.25 mph if only traveling at night (0.19-0.40 km/h). 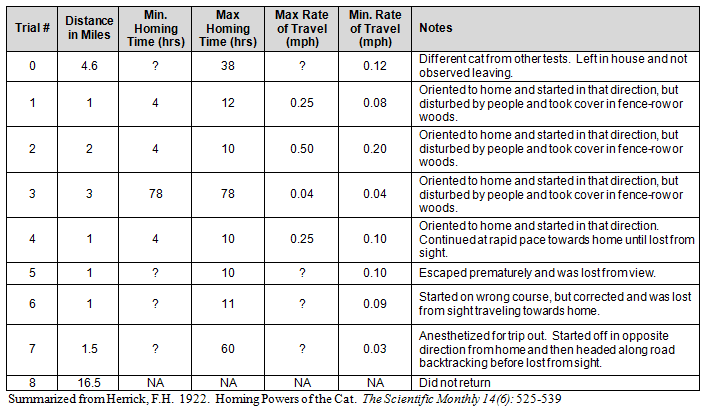 Not only was the cat able to find her way home in each instance, but she appeared to know the correct direction to travel as soon as she was released from the box.  In four of the trials, the cat started heading directly towards home as soon as she was released from the box, but she was then disturbed by people and hid in a fence-row or woods and was lost from sight.  In one trial, she escaped prematurely and disappeared, and in another she started in the wrong direction but corrected and disappeared from sight traveling directly towards home.  Only in trial #7 where she was anesthetized for the trip out, did the cat head off in the wrong direction.

Precht and Lindenlaub (1954)* tested the ability of cats to correctly orient towards home at various distances.  The cats were carried in sacks and placed in the center of a maze which led to six equally spaced exits.  The majority of cats did not wander around the maze, but instead quickly chose an exit (though they were not actually allowed to leave the safety of the maze).  They found that the cats’ homing sense was only fair and directly related to their distance from home.  At distances of 3.1 miles (5 km) from home, 60% of the cats chose the exit that faced the direction of their home, and at greater distances, they did not appear to know the direction of their home.

Homing ability is poorly understood (even in pigeons), but it may be due to an “unusual sensitivity to the geo-magnetic field of the earth which enables [the cat] to keep a compass fix on their home region regardless of distance and direction traveled” (Beadle 1977).  Perhaps not all cats have the same level of sensitivity, and other factors may affect a cat’s homing ability.  Precht and Lindenlaub (1954) found that cats that were returned home between maze tests were more successful at orienting home then those kept in the lab between tests, and young cats there were raised in the lab had no homing sense at all.  Herrick (1922) suggests that all cats probably possess a homing ability to some degree, but that many lost cats do not return home due to diversions or accidents that inhibit or prevent their homing behavior.  He concludes that the use of homing ability is determined by the experience and the physiological state of the cat at that time.

Based on stories in the news, some cats clearly have a powerful homing instinct and the determination to travel home over long distances.  However, this is likely only a minority of lost cats.  For examples of some of these amazing homing feats, see Lost Cats Found.

Since there is so little information available on the homing behavior of cats, I created a survey to collect data on cases of homing in lost cats.  If you have ever had a cat travel home from an unknown location (even a few miles), please consider taking this very short survey.  For more information, see the Cat Homing Behavior Survey or click here to take the survey.   This survey is ongoing, but I wrote an article on the preliminary results.

Check out the results of the Cat Homing Survey here!

*I was unable to find an English translation of Precht and Lindenlaub (1954), so I had to rely on the summary of the study written in Beadle (1977).

There is even a macabre campfire song written about a cat that kept returning home despite his owner’s attempts to get rid of her.