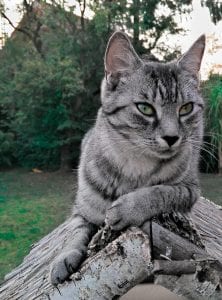 Since there is so little information on cat homing behavior, I started a research survey in 2013.  These are the survey results as of July 2018.  If your cat has ever displayed homing behavior, please consider taking this very short survey.  To take the survey, click here.

Some lost cats are able to find their way home using homing behavior.  Homing is the inherent ability of an animal to navigate towards an original location through unfamiliar areas.  Cat homing ability is poorly understood, but it may be due to an “unusual sensitivity to the geo-magnetic field of the earth which enables [the cat] to keep a compass fix on their home region regardless of distance and direction traveled” (Beadle 1977).

This survey only includes cats that went missing from a location that was unfamiliar to the cat and the cat traveled back to a location where they were familiar.  Possible homing scenarios include:

Arguably, if a cat goes missing from their home and eventually returns home, they may also be using a homing behavior to find their way back home.  However, these are not included in the survey because there is no way to differentiate these situations from other reasons that cats return home (such as being temporarily trapped or hiding in fear), and there is often no way to determine where and how far the cat traveled while lost.

Nearly all of the cats that displayed homing behavior were allowed outdoors (67% outdoor-access) or lived strictly outdoors (25% outdoor-only).  Only 7% of cats were described as indoor-only and some of these may have had previous outdoor experience.  Although I have heard of a few instances of indoor-only cats displaying homing behavior, this seems very rare.  (Note: Escaped indoor-only cats will frequently return to their point of escape, which could possibly be a homing behavior, but the current survey only focused on cats that traveled from an unfamiliar location to a familiar location.)

Most (58%) cats were adults at the time they became lost followed by 34% young adults.  Without more data for comparison, this could indicate any of the following.  There could be fewer kittens and/or senior cats in the cat-owned population or they are less likely to go missing away from home.  It could also mean that kittens and/or senior cats have poorer homing ability or they have equal homing ability, but they may be less likely to successfully travel home.

Slightly more (63%) male cats displayed homing versus females (37%), and more cats (62%) were spayed or neutered compared to unfixed (38%).  In order to determine if these numbers are meaningful, we also need to know the ratio of owned male vs female cats and the percentage spayed or neutered.  According to the 2017-2018 APPA National Pet Owners Survey, 93% of owned cats in the US were spayed/neutered.  This may indicate that unfixed cats might be more likely than average to display homing behavior, but statistical analysis is still needed.

Cat owners were asked to rate the personality of their cat on a scale of 1 (very shy) to 5 (very bold).  They were asked to do this for their cat’s behavior at home, especially in response to strangers in the home, and away from home (if known).  Cats that displayed homing behavior were rated nearly evenly across all personality types.  Thus, shy cats appear just as likely to display homing behavior as bold cats.  Statistical analysis is still needed to test these results.

Most (55%) homing incidents took place when a cat was lost away from home.  This included 22% accidental transport (e.g. cat accidentally climbed into car), 19% lost from a location away from home (e.g. lost from the vet’s office or while on vacation), 8% due to intentional disposal (i.e. when someone intentionally takes a cat and dumps it somewhere else) and 5% lost in transit (e.g. lost while traveling with cat).  Almost all cats lost away from home traveled back to their current home, but a few traveled back to a previous home.

The survey results found that lost cats were missing from 8 hours up to 2.5 years and traveled 0.2 miles up to 80 miles (0.3-129 km).  Only five people reported long distances traveled (80 miles in 3 months, 52 miles in 2.5 years, 38 miles in 6 months, 30 miles in 10 days, and 20 miles in 21 days).  Since this small data set will skew the averages, I calculated the average days lost and distances traveled for several categories (see Table 4).  Hopefully more people will submit survey results for long distance homing and these can be analyzed in more detail in the future.

The average speed of travel was 1.0 mile per day (1.6 km/day).  This average may be a useful to estimate possible distance traveled by a missing cat that may be displaying homing behavior.  However, this is not likely an accurate estimate of actual travel speeds of missing cats because we don’t know the actual distance traveled by the cat and the cat may not have been immediately found once it returned to the home area.  A few cats traveled as fast as 4-7 miles in single day, and one cat traveled 2 miles in 4 hours (a rate of 12 miles/day).

These speeds are considerably slower than those reported by Herrik (1922) in a study where they intentionally transported a cat between one to three miles from home to test her homing behavior (see article Homing Ability of Lost Cats).  This cat traveled an average speed of 0.095 to 0.26 mph (0.15 to 0.4 km/hr) which converts to 2.28 to 6.24 miles/day (3.7 to 10 km/day).  Two factors may account for these faster speeds.  This cat had kittens near weaning age and may have been highly motivated to travel home quickly.  Also, in all but one case, the cat was able to travel home in less than 12 hours and possibly in as few as four hours.  Therefore, she may have been able to sustain a higher average rate of speed.

Thirty-eight percent (38%) reportedly crossed a stream or river.  In some cases, I could view a map of potential travel routes, and most water crossings appeared to be streams or creeks.  However, 16% of cats (where I was able to map the route on Google maps) appeared to have crossed streams/rivers that may have been up to 50 feet wide, and 7% crossed rivers up to 100-300 feet wide.

How to use this information when searching for a lost cat

Unfortunately, there isn’t any research on how frequently cats display homing behavior.  Precht and Lindenlaub (1954) found that at distances of 3.1 miles (5 km) or less, only 60% of cats appeared able to determine the direction of their home, but most cats were unable to do so at greater distances.  The results of this survey found that the majority (73%) of homing excursions were 5 miles (8 km) or less and 88% were 10 miles or less.  Therefore, only 12% were distances greater than 10 miles.  It is certainly possible that more cats attempt to home from farther distances but they may be less successful at getting there.

Based on the results of this survey, homing behavior is more likely if the missing cat:

Some cats do travel across 2-lane and 4-lane highways and streams/rivers so don’t rule out the possibility of homing due to these potential obstacles.  However, other cats may attempt to travel home, but may be stopped by these obstacles.  If you think that your cat might display homing behavior, use Google Maps to draw a line between the location lost and your home (or a previous home).  Place posters along this route.  Check for any potential obstacles such as 4-lane highways or rivers/streams along the route home and place additional posters in the neighborhoods near these potential obstacles.

A few important notes – please read if your cat is missing

Please keep in mind that there are many reasons why an outdoor-access cat might go missing from a new home and many cats that get lost away from home do not attempt to travel back home.  In fact, many of them do not travel far from their point of escape.  Although cats are capable of traveling 1.0 mile or more per day from where they go missing, in most situations lost cats do not travel far (less than one mile is common), and they may circle around back towards the point of escape rather than traveling in a linear direction.  If your cat goes missing and fits one of the possible homing scenarios above, then consider homing as a possibility, but make sure that you understand typical lost cat behavior and follow all the suggested search actions including large florescent lost cat posters in the neighborhood where s/he went missing and a physical search of all property for at least 3-5 houses in all directions from the point last seen.

If you are moving to a new home or traveling with your cat, consider purchasing a radio-tracking device or GPS collar for your cat.  Learn more in this article.