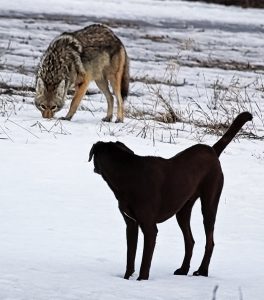 1. Avoid Letting Pets Outside at Night

Coyotes are more active at night, especially in suburban and urban areas.  Obviously, the safest action is to never let your cats outside and only let small dogs outside under supervision.  If you do let your dogs or cats outside, avoid doing so from dusk until dawn.  In California, 70% of attacks on dogs were between 7pm to 7am with the highest incidence between 9pm to 11pm.  Similarly, in Arizona, the majority (78%) of attacks on cats were between 10pm and 5am.

If you need to take your small dog outside at night, do so on a short leash.  Coyotes may still attack small dogs in the presence of people, but attacks of dogs on-leash are rare (only 0.8% of attacks in Denver, CO).

Be extra careful with older dogs, especially those going deaf or blind.  Even if you have been letting them outside at night for most of their life, they can become disoriented and may wander off (from an unfenced yard).  If you find a senior dog has disappeared, this does not necessarily mean that they were killed by a coyote.  Many senior dogs can be found.

2. Don't Leave Your Dogs Alone in a Fenced Yard

Don’t leave your dog outside alone even within a fenced yard, especially dogs under 25 lbs.  Coyotes can easily jump over typical 4-5 foot wood or chain link fences.  They can even climb over 6 foot high privacy fences and 10 foot high privacy walls (more common in the southwest).  In southern California, 81% of attacks were on small dogs less than 22 lbs.  Most (76%) of these attacks took place while the dogs were off-leash in a backyard with a 6-10 foot fence.  In Denver, 20% of coyote attacks on pets were in a fenced yard and another 46% were near a house.

Contrary to popular belief, more coyote attacks occur during pup rearing season rather than breeding season.  Pup rearing season starts in April or May and runs through August.  During this time, coyotes require more food to raise their pups and attacks on small dogs and cats may increase.  Coyotes may also attack larger dogs when defending their den/pups.

4. Don't Let Your Dog Run Off-Leash in the Woods or Open Spaces

If your dog doesn’t stay close to you when off-leash, there is a greater danger that they could run into a pack of coyotes.  During mating season, coyotes MIGHT be more territorial, and during pup rearing season, they MAY defend their den or pups.  Overall attacks on unleashed dogs running loose are relatively low.  In Denver, only 5.3% of reported attacks were on off-leash dogs.

5. Don't Feed or Attract Coyotes to your Yard

Coyotes that regularly eat human food are more likely to have conflicts with humans or pets.  Make sure that you aren't attracting coyotes to your yard or unintentionally feeding them.

Common sources of food include:

Learn More About Risk of Coyote Attacks on Pets

To learn more, check out these articles: