If you only read one book on predators, I would highly recommend this one.  It covers: 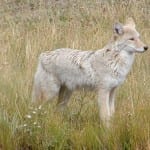 Eastern Coyote Research: researcher Jonathan Way has been studying coyotes in Massachusetts for over 10 years.

Project Coyote: includes a downloadable book, Coyotes in Our Midst, on understanding and coexisting with coyotes.

Also don’t forget all the coyote articles on the Lost Pet Research Blog.

If you have ever had a companion animal attacked by a coyote, please consider filling out this short survey.

.  Menasha Ridge Press.  –  A very comprehensive yet easy-to-read book including almost everything you ever wanted to know about coyotes.  Personally, I think the author is overly grim in her assessment of coyote risk to cats, but in general it is a rather unbiased account of coyote behavior.

.  Yale University Press.  – This book includes a really good chapter on coyote behavior in Yellowstone.  The Yellowstone coyotes are possibly the most easily observed coyotes in the US, so this provides some of the best research on their social behavior.

Trout Jr., John.  2001.  Solving Coyote Problems: How to Coexist with North America’s Most Persistent Predator, Lyons Press – This book appears well researched and contains some good information both lethal and non-lethal methods of managing problem coyotes.  My only criticism is the lack of actual references so you can’t check the sources of his information.

.  Oxford University Press. – This is a fairly comprehensive, research-based book on bobcat biology and behavior. 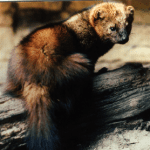 I haven’t yet found any good research websites on fishers.  However, these popular websites provide a decent overview of its biology and behavior.

If you have ever had a companion animal attacked by a fisher, please consider filling out this short survey.

These books are not cheap.  I would suggest checking your local university or college.

. Minneapolis, MN: University of Minnesota Press.  (If you only read one book, I would suggest this one.)