This is the second part of a series on the accuracy of search dogs.  Part 1 looked at Area Detection Dogs. 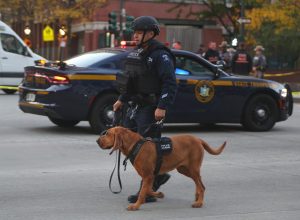 A scent discrimination dog is trained to follow and/or identify the scent of an individual person or animal.  These dogs are described as scent-specific.  In most cases the search dog handler first provides the dog with a scent article containing the the scent of a specific person or animal.  Scent-discrimination dogs may work in one of several ways.

A trailing dog is provided with a scent article (such as from a missing person or animal) and follows the strongest scent trail left by that individual.  Due to the behavior of scent, the scent trail may not be located where the individual actually walked.

Though not common, some scent discrimination dogs may not be trained to track or trail at all.  These dogs are trained to only search for air scent coming directly off of the missing person or animal.  A scent-specific area search dog will only search within an area determined by the handler.

Most scent discrimination dogs should also be able to perform scent matching or a scent lineup.  In a scent lineup, the search dog is tasked to match the target scent to one or more scent samples.  For example a police dog may match a scent article from a crime scene with a lineup including a suspect.  Or a conservation dog may pick out all the scat samples belonging to an individual animal.

In these studies, scent discrimination dogs were presented with a sample of individual human scent and tasked to find matching samples from a series of scent samples or an actual lineup of individuals.  Settle et al. (1994) found that 7 police dogs showed an 80% accuracy in matching scent samples after 9 months of training.

Schoon (2001) reviewed methods of scent identification lineups in the Netherlands .  A prior study by Schoon (1998) determined that scent lineups were similar in reliability to bloodstain, tool marks and hair analysis (i.e. moderate reliability).  However, using the revised protocol, he concluded that the scent lineup should be considered as reliable as fingerprint, firearms and footwear analysis (i.e. highest reliability).  Part of the revised protocol involved disqualifying dogs that failed test lineups prior to being given the scent article from the crime scene.  To qualify as accurate, the dog also had to correctly match the suspect’s scent in two successive lineups.

Marchal et al. (2016) described the type of rigorous training that is involved in developing a highly accurate scent discrimination dog.  These dogs were trained for use in judicial case lineups in France.  Dogs that completed this program showed an 85% sensitivity (i.e. only 15% missed matches) and 100% specificity (zero false matches).  The initial training program took 10 months (with training sessions 5 days per week) followed by continuous training for 8-10 months.  Table 1 shows the improvement in accuracy over ten periods of continuous training.  Near the end of that program, only dogs that gave no false alarms over 200 trials entered into the judicial case program.  Dogs continued to receive training throughout their working life.  Even with all this training, they did not rely on the accuracy of a single dog.  In a judicial case task, scent-matches were always confirmed by 2 to 7 other dogs working on the same case.  The number of lineups used per court case averaged 14-39 with 4.6 to 13 lineups per dog.

In these studies, scent discrimination dogs were presented with the scat sample of an individual animal and tasked to find all matching samples from a collection of other scat samples.  This information can be used to better estimate populations of wildlife using scat collections.

Kerley and Salkina (2007) tested the ability of 5 dogs to match 58 Amur tiger scats to 25 known tigers.  They found that the dogs correctly matched scats 87% of the time.  The accuracy of four out of five dogs increased to 98% with repeated-trial tests.

Wasser et al. (2009) found that 3 dogs correctly matched maned wolf scat samples to the correct individual 79% of the time while missing 21% of scats (averaged from their Table 1).  On average, the dogs selected the wrong match only 9% of the time except for two samples that they got wrong 75% of the time.  They speculate that there may have been cross contamination of those samples.  For accurate results, the researchers recommend using 3 scent discrimination dogs and only using results where at least 2 out of 3 dogs selected the same sample matches.

I did a lot of searching, but I was only able to find a few research articles on the accuracy of scent trailing dogs.  Only the first study (Harvey and Harvey 2003) tested dogs on longer, aged trails.  The other studies used short, fresh trails.

Harvey and Harvey (2003) conducted the first published research study on the trailing ability of the bloodhound.  Eight bloodhounds were selected that had all started their training prior to six months of age.  They were divided into two groups based on their experience.  Novice dogs had less than 18 months of training experience.  Veteran dogs had more than 18 months training and had run one or more trails for law enforcement or search and rescue.  Five trails were set by pairs of people and included a split trail near the end.  Trails were 0.5-1.5 miles long and set in variable terrain in areas with lots of foot traffic.  All trails were aged for 48 hours and their location was unknown to the trailing dog handlers (i.e. blind trails).  Overall, novice dogs only had a 53.3% find rate and one false identification.  Veteran dogs had a 96% overall find rate with no false identifications.

Stockham et al. (2004b) studied whether bloodhounds could use scent from detonated pipe bombs and arson devices to successfully track and identify a target individual.  Twenty bloodhound-handler teams participated in the study.  Trails were set in an urban public park using a split trail method.  Test trails were only 32-41 meters long and were not aged.  Overall, the dogs correctly identified the target person in 53 of the 80 (66.3%) bomb-debris experiments and 31 of the 40 (77.5%) arson-debris experiments with no false-positive identifications.  Bloodhounds with more case experience had a higher success of finding a scent trail and identifying the subject, but no statistical analysis was conducted.

Harvey et al. (2006) tested the ability of 9-13 bloodhounds to distinguish between monozygotic twins, related people and unrelated people that lived together versus those that lived apart.  Scent trails were all on grass, only 150-200 meters long and aged less than 60 minutes.  Two tests were run: Test 1 looked at negative trails, and Test 2 was a split trail.  Table 2 shows the percent of bloodhounds that performed better than chance in trailing and identifying individuals from the split trail test.  Most dogs struggled to differentiate between twins, but had moderate to high success for related people and non-related people, especially when living apart.  The researchers conclude that the results suggest that “the discriminatory capabilities of the bloodhound seem to greatly depend upon a person’s genetically derived odortype.”  However, environmental odors may also be used to facilitate differentiation, especially when individuals are closely related.

Woidtke et al. (2018) conducted the most recent test on the accuracy of mantrailing (i.e. scent-specific trailing of a human subject).  Their study used 7 dogs from different breeds including 3 bloodhounds and one bloodhound mix.  Four dogs were mantrailing police dogs and 3 dogs were private search and rescue dogs.  The dogs had between 1.2-5 years of training/experience (mean = 3.4 years), and all were certified by their organizations.  All trails were set in urban locations with a T-junction at the end of the trail (i.e. split trail).  Trails were only 130 meters long and tests were conducted within 5 minutes of trails being set.  The dogs were marked as successful if they followed the correct scent trail or gave a proper “negative indication,” and they were marked as wrong if they followed the wrong trail (false positive) or could not find the trail (false negative). 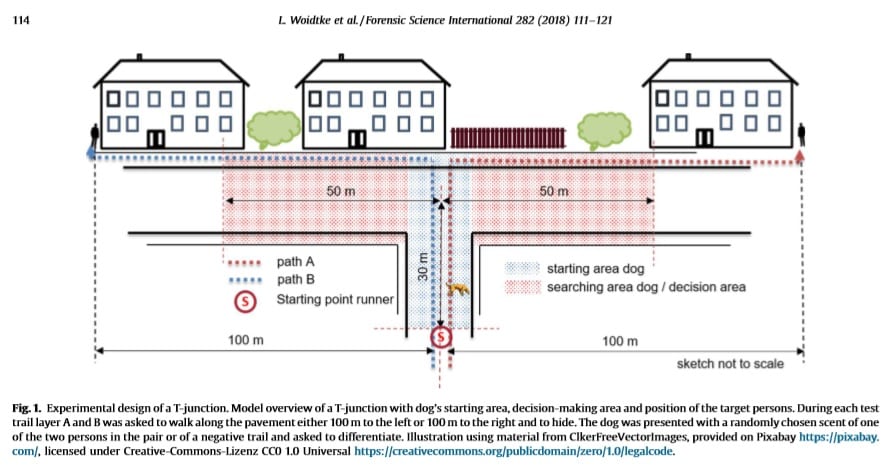 This study found the following results:

In about 25% of trials, the search dog was presented with a scent article from an individual that was not present.  In this case, the correct response is a “negative indication” – rather than starting to trail, the dog should indicate to the handler that no scent in present.  Police dogs gave correct negative indications 97% of the time versus 74% for private search and rescue dogs.  This difference in performance was also significantly different (p<0.01).

The researchers speculate that the police dogs performed better for the following reasons:

While dogs innately have amazing scenting capabilities, scent discrimination is a learned skill that takes years of practice to master.  Even well trained scent discrimination dogs are not infallible.  In the above research studies, some dogs were clearly better than others with accuracy ranging from around 53% up to 97%.  The most accurate dogs had received more than 18 months of initial training, had experience working real-world cases, and continued to receive regular, on-going training.  Search dogs with high accuracy still made mistakes between 3%-15% of the time.  For this reason, researchers recommended using 2 or more scent discrimination dogs to confirm the accuracy of scent-matches or lineups AND performing repeated trials with the same dog.  Novice dogs and those with less training made considerably more mistakes.  Accuracy rates for these dogs were around 50% to 75%.  That means that 25% to 50% of the time, these dogs might follow the wrong trail, lose the trail, miss a scent-match or identify the wrong individual or scent-match.  Overall, scent discrimination dogs appeared to make more errors related to sensitivity (i.e. not finding a scent that was present) than specificity (i.e. making a false or incorrect match).

The majority of these studies were done under laboratory conditions with only a fewer “real world” tests.  Of those tests, only one (Harvey and Harvey 2003) conducted tests using longer, aged trails, and those were only 48 hours old.  Most of the studies used specialized methods to provide the search dogs with uncontaminated scent articles (i.e. scent articles that only contained the target scent and not scents of other individuals).  Unfortunately, in real life most scent articles are contaminated with the scent of other people or animals.  This introduces another factor that could lead to more errors than were seen in the above research studies.  In order to work accurately with contaminated scent articles, trailing dogs must receive additional special training (Stockham et al. 2004a).

In police work, search and rescue, and lost pet searches, actual walk-up finds are very rare.  A walk-up find occurs when the search dog follows a scent trail and actually finds the missing person or animal or police suspect.  The likelihood of a walk-up find depends on many factors including species, age, circumstances of disappearance, environment, quality of the scent article, and age of the scent trail to name a few.  In many cases, a scent discrimination trailing dog may provide valuable information on where the missing person or animal traveled and/or where they are spending time, but other methods are usually used to locate the individual.  For more information on how lost pet search dogs work and when to use one see this article.